On Fearless Girl, women & public art; or, no, seriously, the guy does not have a point. 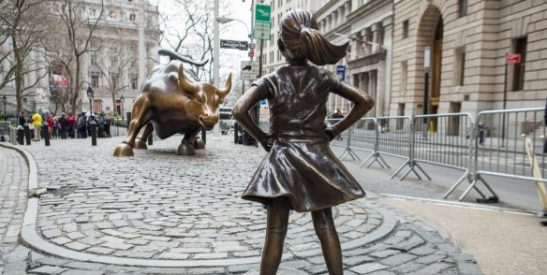 You have probably seen this blog on Fearless Girl vs Charging Bull which has been floating around social media the past couple of days. Yesterday I had a minor tweet rant in response, and apparently I am not done. So here is a blog of My Thoughts™ on the matter.

First, the fact that Greg Fallis’s blog lays out extra context, for example the SHE inscription, is good (notwithstanding his grating Reasonable Objective Man explaining to you silly people who don’t like history tone). Context and facts are always to be welcomed.

That aside, his take is garbage. Here’s some more context and facts to explain why.

I spent a weekend last year counting all the statues in the UK’s Public Monuments and Statue’s database (ikr). I wrote about it in full here, but here’s a brief summary: 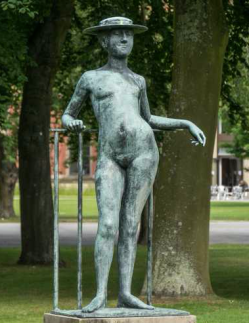 I will admit to not having counted all the statues in the US, but given the recent news that every statue in statue-filled Sofia is of a man; given there are more statues of animals in Edinburgh than of women; given in New York’s Central Park there are 22 statues of men and none of women other than fictional characters like Alice in Wonderland; given that women make up less than 30% of speaking roles in Hollywood films; given US congress is 80% male; and, finally, given, you know, just general patriarchy, there is no reason to think the US is a feminist statue Utopia.

Greg Fallis may not agree, but all of this is also relevant context to the meaning and importance of Fearless Girl. The vast majority of female statues are of nude sexualised women in the role of adoring muse to male brains (I mean, come on, half naked Euterpe is literally weeping over a male HEAD). The representation of a defiant, clothed, non-sexualised female in a prominent work of art is still vanishingly rare — and is therefore a radical act no matter who commissioned it and what the artistic intent was.

Which leads me on to the second garbage take. Greg Fallis says, and I quote,

Fearless Girl also changes the meaning of Charging Bull. Instead of being a symbol of “the strength and power of the American people” as Di Modica intended, it’s now seen as an aggressive threat to women and girls — a symbol of patriarchal oppression.

No, Greg. Just, no. Like many other men, Di Modica may not realise that rampant male-dominated capitalism already is a symbol of patriarchal oppression, already is an aggressive threat to women and girls all around the world, but that doesn’t make it any less the case. Here in the UK, women have repeatedly been found to bear the major brunt of the austerity policies that have been considered necessary to wipe up the mess to the global economy caused by these very same bankers. Last year, the UN charged Switzerland with failing its obligations under the Convention for the Elimination of All Forms of Discrimination Against Women (CEDAW), specifically because of their laissez-faire banking policies, of which Wall Street bankers make such great use. I’m not going to go into a full-on lecture on feminist economics here, but if you’re interested, read anything by Nancy Folbre and you can’t go wrong. But to be clear: rampant unchecked capitalism is a symbol of patriarchal oppression whether Di Modica likes it or not.

And this leads me on to my final gripe with Fallis’s blog: the idea that artistic intent should or even can be the last word on how a statue is interpreted. I’m tempted at this point to tell everyone making this facile point to go and read Barthes’ The Death of the Author but that’s the kind of thing a wanker would do and I, madam, am no wanker. Instead, I will say this. Di Modica may not like the fact that his underlying message of male supremacy has been highlighted, but he doesn’t get to dictate how his art is interpreted any more than the investment fund that commissioned Fearless Girl does. Sure, they can stick their “SHE” gender diversity index plinth on there. But that isn’t going to make a blind bit of difference to how the vast majority of passers-by will interpret and react to the statue, which is simply to see a girl standing up to a rampaging bull. I maintain that anyone who sees that and doesn’t rejoice in their hearts, even a little bit, is dead inside.

Di Modica chose to represent the strength and power of the American people with an intensely male and sexually aggressive symbol. Now he doesn’t like that Fearless Girl is, essentially, calling him out on it. Well. Welcome to the 21st century, Mr Di Modica. You’re going to be seeing an awful lot more of this kind of thing.

This entry was posted on April 17, 2017 by carolinecriadoperez in Uncategorized.